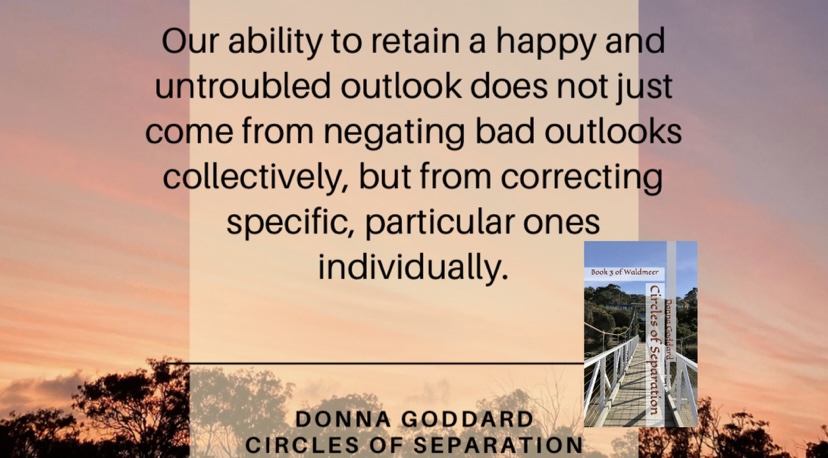 I hope I don’t go anywhere tonight, thought Amira as she fell into bed. She felt so tired after all the break-up drama with her friends.

On the way to the Outer Circle (interdimensional):

As Vera walked along, she was aware of Aquilla’s coming and going. She assumed he was keeping an eye on her and then returning to Mullum-Mullum. Wedge-tailed eagles are predominantly aerial creatures; soaring for hours on end, without beating their wings, and with almost no effort. Their eyesight is extraordinary and extends into ultraviolet light bands. All of a sudden, Aquilla dived towards Vera with remarkable speed. The presence of a diving wedge-tailed eagle causes panic among other birds. They started squawking and scattered in all directions. Several brave magpies made futile attempts to look aggressive, flying towards the eagle, and then darting away again. Aquilla ignored them all as if it was a big to-do about nothing. He roared past Vera, dropping a note on the ground ahead of her.

I am sending you a guide. He rules the land you are currently entering. It consists of many, gentle hills which slowly ascend to the Outer Circle. From a distance, the land looks like one long hill, although it is made of many smaller ones. Thus, it is known as Long Hill. The guide’s name is Lan-Lan.

The note was from Mullum-Mullum. He failed to mention that Lan-Lan was semi-transparent. Lan-Lan appeared shortly after. Vera heard him more than saw him.

“My hills have two views,” said Lan-Lan getting straight to the point. “You will see them as you ascend each hill. One is pleasant. One is not. If you need me, you only need call.”

Vera reached the summit of the first hill and, sure enough, there was a view in front of her. It was very pleasant; full of light and interesting activity. It was, obviously, the “good view”. However, no sooner had Vera surmised this then it began changing form. The enchanting images reformed into dark, menacing ones. With no idea how to get rid of them and certainly not wanting to travel forward into them, she called Lan-Lan.

“Having discerned which is the unwanted view,” said Lan-Lan, “you must un-see it.”

Lan-Lan slowly walked towards Vera or, more precisely, glided as translucent people are want to do. He passed his hand over Vera’s head and closed her eyes lightly with his palm. When Vera opened her eyes and looked towards the view, it had changed into a serene scene of charming hills, shimmering lakes and rivers, grazing animals, and tiny towns in the distance. The whole scene was caressed with soft sunlight.

“This is the natural state of Long Hill,” said Lan-Lan. “Every time you get distracted, remember this.”

As Vera progressed, she found that the unpleasant views, which had been very general up until now, were becoming more specific.

“These are all situations and people known to you, over a vast amount of time,” said Lan-Lan. “In Long Hill, our ability to retain a happy and untroubled outlook does not just come from negating bad outlooks collectively, but from correcting specific, particular ones individually.” Again, Lan-Lan passed his hand over Vera, saying in mantra-like fashion, “What I see is not the truth. Unless I free others, I cannot be free myself. Above all, I wish to see.”

It took Vera quite a while but, eventually, each negative view changed and she became certain and calm. She reached the top of Long Hill with a tender, benevolent assurance inside her.

When Amira woke up, she felt well-rested, at ease, and peaceful. Later that day, she looked after Lan-Lan, for the first time, while Ide was at work. Amira kept peering into Lan-Lan’s eyes searching for something; some recognition, some evidence of more. Nothing. She couldn’t find anything.

“I had to go to the bank today to see what I could do about the mortgage,” said Ide, that evening, when she picked up Lan-Lan. “I can’t pay it on my own.”

“They said that money had been deposited into the account today,” said Ide. “It is ahead of schedule and everything is fine.”

“Yes,” said Ide. Her face relaxed. Some of the trauma was starting to go. “I guess Farkas hasn’t gone as far away as I thought.”

As Amira passed Lan-Lan back to Ide, she suddenly thought, There is something unusual about Lan-Lan. He is always happy. It was such a pleasant trait that it almost went unnoticed. He hardly cried. He didn’t seem to get sick. He slept well. He was undisturbed by other people’s emotions. He came with happiness inside him and he was already sharing it with the world.

Although both Gabriel and Bryan did not get along well with Farkas, they got along well with each other. They were not dissimilar in nature, although Gabriel was more creative and free-thinking and his life experience was broader. If Bryan made a comment that sounded too country hick for Gabriel’s liking, Gabriel would make a joke about it. Both men’s preference was for lack of conflict, however, if push came to shove, both were prepared to stand their ground. Bryan may have been more conventional than Gabriel but he was more grounded and consistent, perhaps, more mature. For one thing, he didn’t laugh at other people’s expense. Depending on the company Gabriel kept, he could and did. Also, if Gabriel was having one of his downward spirals, he could become angry for whole stretches of time. Bryan didn’t tend to do that. He tried to fix up his problems in a relatively decisive and constructive way.

One of those problems was, of course, Teresa. That particular problem was not succumbing to Bryan’s normal problem-solving method. Although Bryan and Teresa had broken up, he had found a reason to come into town, from the farm, every day this week. He would get coffee, take one to Teresa, and stay at the bookshop for half-an-hour or more talking. Deciding that it wasn’t sensible to keep doing that, Bryan asked Gabriel if he wanted to catch up for coffee.

After a bit of guy-type small talk, Gabriel asked Bryan how he was doing.

“Not too bad,” said Bryan. “We made our decision. We have to get on with it now.”

Gabriel was as little convinced by that response as Bryan was. “Yeah, sure, man,” said Gabriel. “Just gotta get on. Plenty of fish in the ocean.” Bryan didn’t bother to smile. Searching for something to say that would help, Gabriel added, “Was there a particular problem?”

“We were seeing the future differently. That’s all,” said Bryan. Bryan was one of those men who, although friendly to everyone, only trusted his woman with important, personal information. As he didn’t have that woman anymore, he suddenly decided that Gabriel was the next best thing. “I don’t know, dude. It was going great but then I realised Teresa didn’t want to get married and it all fell apart.”

Gabriel nodded and said, “I suppose that was different to what you had in mind.”

“I’m not one to give relationship advice,” said Gabriel after gathering his thoughts, “but does it matter that much? Is it worth losing her over? Isn’t it, sort of, more important to look at the person sleeping next to you and think, This is the person I want to be with; problems and all?”

Bryan nodded and said honestly, “It probably seems, somehow, safer if the person marries us.”

Gabriel laughed and said, “I don’t know how safe it is. These days, if people don’t want to stay, they don’t.”

“I don’t want the person I love to feel like a prisoner,” continued Bryan. “I just don’t want to get hurt myself.”

“Thanks a lot, bro,” said Bryan shaking Gabriel’s hand. “Gotta get back now.”

They caught each other’s eye sympathetically and parted ways.