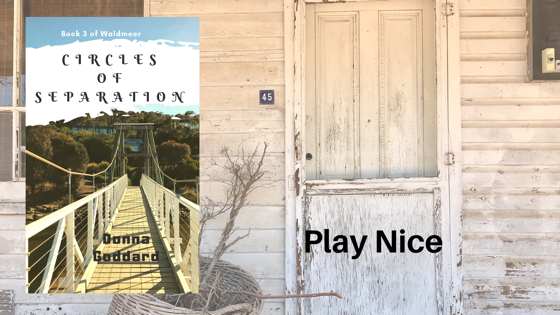 We must know who we are and where we are.

Chapter 13: In This Together

Since leaving Ide, Farkas had been staying in a motel, ten minutes outside of Waldmeer. Contrary to his initial hypothesis that after the first night, every night would be easier, every night was getting more depressing. He decided to take a drive into the Leleks. Maybe, the forest would help. He had to pass back through Waldmeer and stopped for coffee. The coffee shop was next door to the Opportunity Shop. On seeing it, Farkas went back to his car to get several bags which had been travelling with him, in his boot, for months.

The drop-off area was locked, so he had to take the bags into the shop. Someone was crying. He really didn’t want to stay but something about the sadness in the unguarded voice made him stand still. He coughed to make his presence known. The crying instantly stopped and a lady appeared from the back room.

“Wait a minute, please,” said Amelia, the shop assistant. “We have to check them to make sure you are not giving us rubbish.”

Farkas groaned. Amelia must have been the slowest shop assistant in the world. He would have left but Amelia started to cry again as she was slowly, painstakingly slowly, checking his bags.

“Are you alright?” asked Farkas wishing her to stop crying.

Amelia looked up and saw a kindness in Farkas’s eyes. “No. No, I’m not alright at all. I just don’t understand why people have to be so mean.”

“What did they do?” asked Farkas.

“My tennis group doesn’t want me anymore,” said Amelia. The look on Farkas’s face would have let her know that he hardly thought that was the end of the world but Amelia was too busy being upset to notice.

“What did they say?” asked Farkas.

“That I only think about myself,” said Amelia. “Imagine saying such a thing.”

“They say that I am the weakest link. I most certainly am not. I can surely play better than several of the other ladies,” said Amelia.

Pathetic, thought Farkas. He looked at Amelia. She was about sixty. Even though there would only be ten years between him and Amelia, the difference in the state of their bodies was more like thirty years. She was bordering on tubby and had the coordination, or lack thereof, of a woman who has done little physical exercise over her entire life. It was difficult to visualise her running around a court, let alone, getting a ball where she wanted it. If she is not the worst then the rest must be pretty awful, Farkas thought.

“I’m sure you can play better than some others,” said Farkas. He didn’t want to spoil her dreams.

“Thank you,” said Amelia looking with interest at the stranger. “What did you say your name was?”

“I wish they had your good sense, Farkas. I am Amelia.”

“Who told you to leave the group?” asked Farkas.

“My friend, Verloren,” said Amelia. “No one said she is the boss of the group but all the other ladies do what she says. I don’t know why.”

“Verloren? I know her,” said Farkas who had, in fact, known her for years. “What did she say, exactly?”

“She said that I flirt with the coach and try to own him,” said Amelia.

“No, I most definitely do not,” said Amelia.

“What else did she say?” asked Farkas.

“She said that I am selfish and nasty and that I always want the best spot,” said Amelia. “How could she say that?”

Farkas shrugged and passed Amelia a tissue. She took it and held onto his hand as she cried. He didn’t pull away. She doesn’t mean any harm, he thought. Actually, she probably does but it’s all so pathetic. Eventually, Farkas said that he had to go. “You tell Verloren that I said she has to let you back in.”

“She will listen,” said Farkas as he walked towards the door. “No more flirting and be nicer to the other ladies. They are your friends, after all, and you are all in it together. You are not the only one who loves tennis. I’m sure they all love it as much as you.” As the door banged, Amelia heard him say, “Play nice.”

What a gentleman, thought Amelia as Farkas walked out the door. Maybe, I’ll ask him if he wants to join our tennis group? With that thought, she brightened up and picked up the phone to call Verloren to tell her about her new friend.

Feeling less despairing, Farkas drove along the winding, dirt track into the Leleks. He had a sense of inevitability as he crossed the walking bridge into Erdo’s territory. Although this was his third time crossing that bridge, he had never met Erdo. Erdo didn’t say anything as he stood next to the lake but indicated for Farkas to follow him. They walked thirty minutes into the forest and came to an old cottage which Farkas assumed was Erdo’s home. Beyond it was a working farm; rows of vegetables, a small orchard, hens, and some crops in the distance. Strange, thought Farkas, that Amira never mentioned, over all these years, that Erdo had a fully-functioning farm.

On the front wall of the house, Farkas noticed the house number forty-five. He wondered what it was forty-five of. There was no street or road of any kind. There were certainly no other houses. Underneath the number was a rustic wicker basket with long, thin branches resting hocus-pocus inside. To break the tension, Farkas joked that the basket looked like something for witches brooms.

“Don’t be ridiculous,” replied Erdo. Farkas felt that his joke had fallen flat. “They park out the back,” added Erdo. Farkas looked at Erdo but he was busy pointing out various practical aspects of Farkas’s accommodation. “I sleep upstairs,” said Erdo. “Your room is here at the back of the house.” Although simple, the cottage was very homely. A sense of safety and contentment seemed to emanate from its walls.

“You will be helping with the farm jobs, bright and early,” said Erdo. Farkas was not a farm-type. Although very healthy, his skin was pale and he was thin. He didn’t have the robust body-type of a farmer. Nor the appetite. He normally wasn’t that interested in food. Add to that, a fast metabolism and there would never be excess weight on him. Over the next few weeks, the paleness left, his appetite grew, his muscles felt like they were working in a different way, the thoughts that tended to preoccupy his mind lessened, and he started to feel and look different. One day, in the first week, Farkas did try and leave. He headed in the direction of the bridge. However, after an hour, he ended up back at the farm. He had walked in a circle, although, he wasn’t sure how. After that, he settled into being with Erdo and the steady, predictable nature of farm life.

One evening, next to the fire, Erdo asked Farkas if he had a family.

“I have a son,” answered Farkas.

“With his mother,” replied Farkas.

“Do you help with him?” asked Erdo bluntly.

Farkas fired up. “Of course, I do. It’s my child. I pay child support through the mortgage account.” Farkas glared at Erdo and said, “I’m not a jerk.”

Completely unperturbed, Erdo said, “I didn’t think you were a jerk.” Erdo turned to the black cat that was lying at the foot of the warm, wood stove in the kitchen. He asked, “Do you think Farkas is a jerk, Francis?” Francis looked with contempt at both of them, raised her bottom in the air, and walked off disdainfully.

“Isn’t she a sweetheart?” said Erdo seriously. Farkas thought she belonged with the witches and their brooms.

A few days later, Ide got a letter from Farkas. It had no stamp and so it must have been hand delivered. All it said was that he hoped she and Lan-Lan were okay and that he was working in the forest. The return address was No. 45, The Leleks. Ide asked Amira if she knew where that was but Amira had no idea. “So long as he knows where he is,” said Amira, “that’s the important thing.”