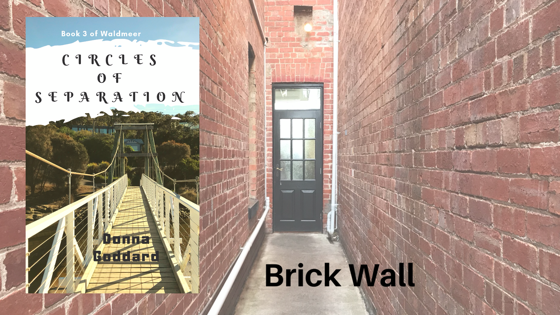 Be forgiving but wise.

A few years ago, when Amira first returned to Waldmeer from Eraldus, she had an unfortunate experience with a Waldmeer couple, Oswald and Billy. They were domestic and business partners and owned the upmarket, Hattery, in the main street of Waldmeer. It wasn’t exactly in the main shopping strip. A narrow path between the brick walls of two buildings led to a plain, black door which was the entrance to the exclusive shop. It didn’t have a sign.

Oswald said, “We want our reputation to speak for itself. The people will find us.”

“The right people,” added Billy with a touch of snobbery.

As the name suggested, the Hattery sold men’s hats. Both the shop and the men were chic and edgy. Oswald and Billy designed and, often, made the hats themselves. The Hattery had an assortment of boutique hats; Ecuadorian panamas, Fred Astaire fedoras, aristocratic bowlers, summer boaters, casual and cool newsboys, versatile and stylish beanies, and glamorous top hats.

“We sell everything but baseball caps,” said Billy.

“We don’t do cheap and nasty,” said Oswald. “We aren’t in the business of covering middle-aged, balding heads,” he added, although, he was starting to lose his hair, himself. “We do fashion.”

Although Oswald and Billy advertised their hattery as a place for the modern gentleman, they were often heard to say to their adoring female fan base, “If men’s hats were good enough for Marlene Dietrich, they are good enough for you, darling.”

Although the store was tastefully crammed with fine hats, it, also, had a corner dedicated to other items; books, cards, and ornaments. Everything in that corner had something of a spiritual element and that is how Amira originally came to be interested in the men and their shop. Anyway, technically, Oswald and Billy were the new folk and she was the local. She wanted to be welcoming.

Billy looked like a well-dressed gentleman from the 1940’s, even though, he was only around thirty-five. Slim, fine-featured, impeccably groomed, and, equally, impeccably mannered. He was the first to smile and engage with the customers and was unfailingly polite and attentive. Oswald was different. About five years older, he had more fire inside him. He had a passion for life but, also, a simmering pain inside him which seemed to burst out periodically. He would then rely on Billy to fix everything up. The men had been together for about seven years. Billy adored Oswald. Without Oswald, Billy was boring. Oswald needed Billy. Without Billy, Oswald got lost. They tended to make a big to-do about their relationship and were used to a responsive crowd, “Oh, aren’t they cute? Don’t they love each other? The perfect couple.” Amira thought that sort of thing was silly when done by straight couples and, equally, silly when done by gay ones.

In the early days, Amira called into the Hattery frequently to say hello and browse. She soon started talking about her healing work. Her practice was new in Waldmeer and, in retrospect, she was probably a little too keen to share it at that stage. The wisdom of perspective, often, comes after the event. Oswald was genuinely interested. He was, particularly, impressed by anything psychic or unusual. Novice seekers look for validation of their newfound leanings. As Oswald became more interested in Amira and her work, Billy became more suspicious. Amira realised that Billy’s gentlemanly smile was only given if one did not threaten to disturb his life. Whenever she called into the shop, Oswald would eagerly take up their conversation from where they left off but Billy’s jealousy and dislike were intensifying.

Oh dear, thought Amira. Billy thinks if Oswald changes then their relationship will be at risk. Maybe, he is right. Although Amira understood Billy’s fear and did not want to cause him stress, it was more important to her that a soul may be reaching out to grow. Life would have to take its course. It did.

One morning, Amira walked into the shop and was greeted by an icy silence. Oswald remained at the back of the shop and Billy came to meet her.

May I help you? thought Amira. I, always, come in here and Oswald, always, talks to me. I don’t want your help, Billy, because you don’t like me. “No,” said Amira. “Thank you. I’m just browsing.” She picked up a hat as if considering it, although, it would have looked absurd on her. She put it down again, rather awkwardly, and left.

Amira found it difficult to accept that her budding friendship with Oswald had so abruptly aborted. She tried on numerous occasions to call into the shop or wave to Oswald and Billy in the street. Each time, they reciprocated with a brick wall. Amira was hurt; not so much by Billy but by Oswald. She knew that Billy thought he was fighting for his relationship. Fear can turn a manicured gentleness into a snarling critter. However, Amira thought she had developed a genuine connection with Oswald. He had abandoned ship and left her on the sinking one with not a backward glance.

Occasionally, if Amira saw Oswald when Billy wasn’t with him, she would see a different look on his face. Probably, it was guilt. However, if Amira gave him even the slightest positive response, he would walk off as if she was pursuing him with unwanted advances. Is his concept of love so limited? wondered Amira. Any relationship which intentionally harms other people for the “sake” of the relationship is on a very shaky foundation.

That was more than two years ago. Oswald and Billy were still going strong.

Gabriel had been in Darnall for the last week and a half. Amira messaged him to suggest that she drop off some of his clothes next time she was heading Darnall way. She felt that he didn’t want to come home but would surely need his things by now.

“Thanks,” said Gabriel. “The owners of the house I’ve been staying in are coming back from their holiday today. They have a shop in Waldmeer, the Hattery. You might know it; down the path between the big brick walls to the black door.”

“Yes, I know it,” said Amira. “I believe the owners are Oswald and Billy. Is that whose house you are staying in?” Amira had never mentioned Oswald or Billy to Gabriel. At the time of her problem with them, Gabriel was busy in Eraldus and Amira didn’t see him much. When she did, she didn’t want to bother him with her troubles. Even though Amira had never mentioned them to Gabriel, she was fairly sure that they would soon be mentioning her to him in a less than complimentary manner.

“Can you please take a bag of my clothes to the shop,” said Gabriel, “and they will bring it back to Darnall after work tomorrow.”

“Sure,” said Amira. She dropped the bag off that day to a temporary shop assistant.

It was Gabriel’s 40th birthday the following week. The Boys of Darnall decided to throw him a party at the one and only nightclub in Darnall. Even though the nightclub couldn’t compete with a fashionable city nightclub, the Boys did their best to keep it as on point as possible. Although it didn’t seem a particularly good idea, Gabriel messaged Amira to invite her as he couldn’t not invite her to his 40th.

Amira had never been to a nightclub. She was, and always had been, more interested in convents than clubs. The drinking, noise, darkness, packed bodies, meaningless conversations, uncensored sexuality, and blatant craving for human connection were the antithesis of who she was. She felt it was the antithesis of who anyone really was. Nevertheless, she felt she had to go because it was, after all, Gabriel’s birthday.

Having no idea what to wear, she asked her two girlfriends, Teresa and Ide. Teresa was no help. She was too… bohemian. Ide wasn’t a help either. She was too…, er, Irish. Amira decided to go to the one young, trendy clothes shop in Waldmeer. The sales assistant was, indeed, young. She was only eighteen. She was very willing to help but everything she gave Amira to try on was too short, clingy, see-through, or, generally, ridiculous. Amira ended up buying the only dress that was passable. Just passable.

The following Saturday was the party. From the moment Gabriel saw Amira, he looked worried. He could have been embarrassed by her obvious lack of fitting in but it wasn’t that. He knew that the Boys of Darnall could be mean and that Amira would make little effort to oblige with small talk. She would probably end up standing there, not bothering to correct the awkwardness of the situation. Gabriel tried several times to take her with him and, also, to introduce her to a few people but nothing worked. He couldn’t stay with her because everyone in the room wanted to talk to him. Amira would have left but she felt it would be too obvious. In the end, Oswald approached her. He would, likely, say something nasty.

“You don’t belong here,” said Oswald with an unreadable tone. Amira looked at him. His eyes were softer than usual. She wasn’t sure if he was humiliating or saving her. He pointed to the back door which was a few steps behind them. He seemed to be suggesting that she could slip out without anyone noticing.

After a forty-five minute drive on a dark, country road, Amira arrived home. Far from feeling lonely, the winding, empty road and reassuring night sky helped to restore her sanity and equilibrium. Nothing could be lonelier than that club, thought Amira. Once home, she turned on the lights and heating, took off her dress, put in in the bin, and said out loud, “If Gabriel wants to be part of my life, we will have to meet on neutral ground. I will not ask him to be more than he can or wants to be but I will not be less than I am.”

In the middle of the night, Amira woke up. She didn’t wake up as Vera. Nor was she in Long Hill or one of the Circles. She was Amira in Waldmeer. That’s strange, Amira thought. Why am I here? She was opening a black door. The Hattery, she thought. As she entered, she noticed moving boxes in one of the corners. Billy approached her. He had a warm and trusting smile.

“Hi,” said Billy shaking her hand, “My name is Billy. Sorry, we still haven’t finished unpacking but welcome to the Hattery. Please look around.”

“Thanks,” said Amira. It must be when the shop first opened, thought Amira. She glanced towards one of the many shop mirrors. Yes, I do have a few less lines, she thought approvingly. She walked to the corner with the spiritual knickknacks.

Oswald came up to her and said, “They are nice, aren’t they? Do you have an interest in things like that?”

“Oh, I love stuff like that,” said Oswald passionately. “We must talk.” He took her arm and looked like he had just come upon an interesting treasure.

Oswald thought she meant that right now he would be too busy setting up shop. “I’m never too busy for a real conversation,” he protested with a hopeful smile.

Amira released her arm from Oswald’s hand, smiled back at him with forgiving but distant eyes, and left.