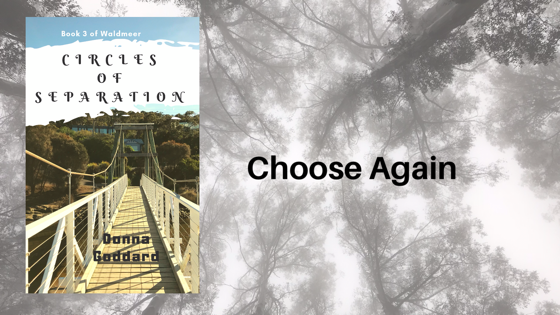 Don’t feed the drama monster. It’s insatiable and has no friends.

Amira took every opportunity that crisp, glorious day to be outside. She walked down to the beach and returned via the shops and up the hill taking the longer route past Verloren’s holiday house. There was a For Sale sign in the front garden. She stopped to look at it and wondered why Verloren would be selling. In the five years since Farkas sold this house to Verloren, thought Amira, he has lived at Charlie’s property in the back hills and in Ide’s bungalow, bought a house, started a relationship, had a baby, ended a relationship, and, hopefully, is now resurrecting that same relationship. What Amira didn’t recall was Farkas’s two interdimensional trips to the North Country; one to the wolf pack for a whole winter and one to the Head Gardener’s house in the Garden of Garourinn. Verloren had also been given the privilege of an interdimensional visit to the Garden of Garourinn in her earliest Waldmeer days. Its value seemed to lie dormant for the many years since. Verloren did occasionally dream of the Head Gardener. She didn’t know who it was other than a wise man giving advice. Generally, she couldn’t recall what the advice had been.

“Hello,” said Verloren as she came from the side walkway and saw Amira standing in front of her sign. “As you see, we are selling. I am sick of the small-minded mentality in this town.”

“Oh, that’s a pity,” said Amira. She wanted Verloren to grow not go.

“Is it a pity?” said Verloren. “For years, I have tried to get these people,” she waved down the hill as if she was waving at the peasants below, “to accept and appreciate me. They can’t see anything except their own petty lives.” Now that Verloren had virtually no contact with Farkas, her previous attitude to Amira had improved. Every now and again, Amira thought that she even saw a tiny, budding desire for friendship. A different friendship to what Verloren was accustomed to; not to boost her ego, support her gripes and dramas, or further any cause she had in mind, but friendship for its own sake. Changing her tone, Verloren said, “Since I have put my house up for sale, I have had several dreams that a man keeps telling me, ‘Don’t change your location. Change your approach.’”

“He says something like, ‘Don’t feed the drama monster. It’s insatiable and has no friends.’ I don’t understand it,” said Verloren, “because I don’t look for drama. It looks for me!”

Verloren looked at the sky with its vast, endless blue and said, “It is spectacular, isn’t it?”

“I have to go now,” said Amira. “I’m going into Darnall, this evening, to help Gabriel with a group of dementia patients.”

“That’s nice of you,” said Verloren.

“I don’t know how nice it is,” smiled Amira. “We are supposed to be teaching them dancing and neither of us knows what we are doing. It may not be nice at all.”

Chapter 29: Not Well or Sick

That evening, Thomas was sitting in his lounge room admiring the majestic rug Herat had, recently, given him. He wondered where the intentional fault was that Herat had spoken of. He wondered why Herat had given him a gift that had “undying love and healing” in it. Amidst his wonderings, his phone rang. He could see that it was Kathleen. That’s strange, thought Thomas, Kathleen rarely rings me. She waits for me to ring her because she doesn’t know my schedule.

“How are you?” asked Thomas with concern.

“Yes?” said Thomas with growing concern. If it was “little” she wouldn’t concern me with it all, thought Thomas.

“Maybe, the well ones are not concerned with their health because they are well,” said Thomas half-heartedly. His mind was racing with scenarios about Kathleen.

“Perhaps,” said Kathleen, “but I have a feeling it’s the other way around. Anyway, so as to not cause a fuss, I do all those annoying tests women over fifty are supposed to keep doing.” Kathleen’s voice faltered. “You are the only person I am telling this to. I have received a troubling test result today and I need to see a specialist in the next few weeks.”

Thomas was still. When something really mattered, Thomas became a different person. Not completely different but a higher version of himself. It had happened to him numerous times in his life but he didn’t understand what he was doing. It was the healing gift. “I see,” said Thomas after a lengthy pause. “Kathleen, you are not to worry about this because you are going to be well and happy. Nothing is going to hurt you. Further, I think that it may be a fortuitous opportunity for us to go on a holiday for a few weeks.

“What about work?” asked Kathleen.

“My deputy can take over. I have, what must be, years of leave accrued by now. So, where would you like to go? On a cruise?”

“No, Thomas,” said Kathleen emphatically. “I can’t think of anything worse than being stuck in a confined space with indulgent people, indulging in massive amounts of food and indulgent, endless entertainment. No.”

“Okay,” laughed Thomas. He loved cruises. “It’s not a busy time of year for tourists. It’s cold. Why don’t we just set out in the car and make up our mind what to do as we travel? We are old enough to trust that life will show us where to go and how to get there.”

“Agreed,” said Kathleen. “There is one other person that I have told.”

“My brother, Aishi,” said Kathleen. Aishi was a monk and worked in a retreat centre in the hills outside of the city.

“He said, ‘When the body is in its rightful mode, it is silent. We feel neither well nor sick, healthy nor unhealthy. The body becomes the quiet, perfectly functioning tool by which God uses us in this life. Your body can be well just as easily as sick. Your life can be harmonious and glad just as easily as it can be tormented and dramatic. Choose carefully. And if you have chosen unfortunately then choose again.’”

“I will pick you up after work this Friday,” said Thomas

“You look so much younger without any facial hair,” said Teresa to Bryan that same evening, in one of the Darnall restaurants. They had driven there separately as it was easier for Bryan to drive straight to Darnall from the farm rather than to drive via Waldmeer. Bryan had dressed up and shaved. It was their first outing since breaking up. Teresa looked at Bryan’s fresh, young face and the ten-year age gap seemed more obvious than it ever did before. “You are not allowed to say that I look so much older when I do certain things,” laughed Teresa. Bryan laughed too but decided it was best not to say anything, even in jest, in their current circumstances. After the meal, Bryan wanted to say something of more substance before the evening ended.

“I want to be upfront with you,” said Bryan.

Bryan frowned a bit and looked at Teresa as if to say, You were not upfront with me about not wanting to get married. He said, “I’ve been on a date with one of my old school friends.” As Teresa and Bryan were both locals of Waldmeer, Teresa probably knew the woman. Her mind checked through all the women from Bryans’s year level who would be now in their early thirties and who were still single or single again. She couldn’t remember who was in his year level. It was too far below her. She was out of high school when he was still running around the primary school playground getting grazed knees and plotting to steal the treasures from the girls’ stick cubbies.

“It’s not what I want,” said Bryan a little condescendingly. “I want love but not everyone wants that.”

The project coordinator from the Psychology Department handed Gabriel instructions and said, “This is from the dance instructor. I will be in the room with you but I will be a non-participating observer. We want to see if the dancing program has any observable effect on the patients’ memories.”

Gabriel read the instructions to Amira.

Gabriel started reading from the notes and showing the class what to do. No one moved or even listened. He put the paper on a nearby chair. “Can anyone dance?” he asked the class.

“We can,” said an elegant gentleman in his mid-eighties. “My name is Wolfgang and this is my wife, Madeline. My wife has been here in the Dementia Unit for the past year.”

Full of the gift of the gab, Wolfgang continued without missing a beat, “We danced competitively decades ago and went to Blackpool many times. It was the most important international competition of the year. I presume it still is.” Some of the class members were now listening.

“Would you and Madeline like to demonstrate?” said Gabriel turning on the music. Gabriel may not have been a dance teacher but he was an art teacher and could read a class.

“We would love to,” said Wolfgang. He took hold of his wife’s hand and as they danced, he seemed to be regaining part of Madeline. “We were quite a duo back then. I remember that my white jacket caused a big stir amongst all the conventional black ones. It upset the apple cart, alright. Some of the judges loved it and some hated it. We didn’t care. Who cares about judges when you have each other and you are creating something together? Winning only matters when you don’t have what dancing really is.”

As Wolfgang and Madeline danced, Gabriel and Amira went around the class dancing with each participant. Shuffling would be more accurate but it was enthusiastic shuffling.

“I remember,” said Wolfgang to anyone who wanted to listen, “the first time I danced with Madeline. We were having a tryout. Neither of us was very good at that stage. We did Cha Cha and it went okay. Then came Rumba; the dance of love. A few steps into the dance, Madeline held her hand on my stomach. I was a little surprised because she was a shy and proper young lady. It seemed a little forward. Not that I minded. Oh, no. You see, it was the way she touched me. I felt electricity in my body. I didn’t know if other people felt it when they danced with her or only me. Either way, I wanted her.” Wolfgang smiled at Madeline and she smiled back, although, it wasn’t clear if she understood anything he was saying.

“When my wife was much younger,” said Wolfgang, “she would often say, ‘You gotta know when to hold ‘em and when to fold ‘em.’”

“Did she?” asked Madeline who suddenly found her voice but not her memory. “What a wise thing to say. I hope you held onto her.”

“I did,” smiled Wolfgang.

Later, while walking down the hall, Amira said to Gabriel, “That was easy.”

“How is Lan-Lan?” asked Gabriel.

“Cute as ever,” said Amira. “It looks like Farkas may be back home, at least, for the weekends so I won’t have Lan-Lan quite as much.”

At that moment, Wolfgang walked passed and stopped to kiss Amira’s hand and shake Gabriel’s. “Thank you, young man,” said Wolfgang. “You reminded me of how love makes life light up.” He walked off briskly, calling behind him, “See you next week. Before we know it, we will all be at Blackpool.”