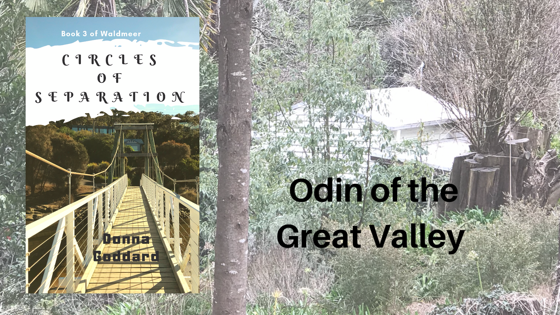 The boys lay on the wooden floor of the tree house and gazed up into the moving leaves. It was a grand tree house; three stories, with a flag at the top, and lights that came on every evening. It was fit for a king which is just as well because the boys were royal. Malik was fourteen. He looked over the nearby palace roofs into the Borderfirma Mountains. This land belonged to his mother and the surrounding Borderfirma lands belonged to her siblings. The Borderfirma lands, together, made up the Inner Circle.

“It’s spring,” said Malik. “Odin should be coming to get us soon.” Odin had always been their main protector. He was huge and extremely strong. He was also funny and a child at heart which is why the boys enjoyed his company so much. Odin had many other duties besides the children. He was, after all, Odin of the Great Valley. He normally lived in the Great Valley in his mother’s cottage. Odin’s father had been killed when he was a child. On that day, Odin had determined that he would become strong enough to protect all those he loved. He eventually became custodian of the royal children. As he did not usually live in the palace, he had appointed some of his trusted warriors to assist in the duty.

“And Mummy should be back soon,” said the younger of the two boys. At eleven, Aristotle felt his mother’s absences keenly. It wasn’t only because of his age. Malik was more resilient and robust than his younger brother. Aristotle was sensitive to everything around him. He listened to the animals, felt the winds changing, and generally felt a great deal more in his soul than many adults.

“She’s only been away a month this time,” said Malik. He was used to his mother’s coming and going. He looked at Aristotle’s sweet face and added sympathetically, “Don’t worry, buddy. I’m sure she’ll be back soon.” Aristotle looked at Malik with admiration and trust. He wished he was as strong as his big brother. He was sure that Malik must be almost as invincible as Odin.

The boys’ sister was hurriedly walking across the lawn towards them. “I have wonderful news,” she called to them. “Nanny told me that mother will be back in the next few days.” At twenty, Bethany was not much more than a girl but she already had her own baby. On seeing the boys, the baby squealed with delight and struggled to get out of her mother’s arms. Bethany only weighed as much as Aristotle. She had trouble holding onto her flailing baby.

“Come down, boys,” said Bethany. “I can’t hold onto Lentilly for much longer.”

“Pass Lentil up to us,” said Malik. Bethany sighed. Ever since she had named her baby Lentilly, Malik had been calling her Lentil. Much to her annoyance, everyone else thought it was such a good name that they also called her Lentil although, to Bethany’s face, they did make an effort to remember her baby’s real name. The boys made no such effort.

Not wanting to insult the boys’ child minding ability (but certainly not willing to let Lentilly play at the top of a giant tree with two teenage boys), Bethany was about to entice the boys closer to the ground when Malik yelled out. He pointed beyond the palace gates, “Look. Look. It’s Odin.” Both boys bolted down the tree at breakneck speed, ran to Odin, and jumped all over him. Odin wrestled them with a very serious face as if his life depended on it and then when he thought they had had enough, he said that he was hungry and they should all go inside.

The next morning, all five of them – Malik, Aristotle, Bethany, baby Lentil, and Odin – set out for Odin’s cottage in the Great Valley of the Borderfirma Mountains. Normally, the royal children had an entourage to look after them; protectors and carers. They had a loving band of relatives and carers who doted on them. Nanny was the main one. She didn’t dote on them. She was tough. She said that the children were indulged far too often. She also said that there were many more bad ways for royal children to grow up than good ways and that no grandchild of hers was going to become a lazy, self-centred adult not knowing their responsibilities in life. She was tough but she loved them with a passion. It was rare for the children to set off with only one carer but Odin was worth an army. Being relieved to get away from the palace entourage for a while, Bethany had insisted to her grandmother, “We’ll be fine. We have Odin and I will look after Lentilly and the boys till we get there. Once we are there, we will have Odin’s mother. She’s as powerful as Odin in her own way.”

Amira could smell the sweet spring grass. She stretched out her arms and opened her eyes. The sun was warm and soft on her face. Chester licked her. He was Odin’s cat. “We are so glad that you have returned, Lady Faith,” said Chester.

Amira sat up and looked around. She was in the field beyond Odin and his mother’s cottage. When Amira was in the Borderfirma Mountains, she remembered not only her life in Borderfirma but much about her other lives elsewhere. However, when she was on Earth, she had no recollection of her Borderfirma life at all. She had been told that it was best for it to be that way.

“How are the children?” Amira asked expectantly.

“They are perfectly fine,” said Chester reassuringly. “They are very excited to be coming to the Great Valley and to see you again.”

“Oh yes,” said Chester. “You will be surprised how much she has grown. And she says words now,” he added so proudly that Amira wondered if it was Chester who taught her the words.

“How is Aristotle?” asked Lady Faith.

“He will be glad to see you,” said Chester tactfully.

“How long have I been gone this time?” asked Lady Faith. Time was different in Borderfirma. It didn’t work like Earth time.

Amira stood up and shook off her clothes. Looking at them more closely, she said, “I better get changed into something more appropriate.”

Odin’s mother, Nina, sensed Lady Faith’s arrival and ran to her with outstretched arms. At least, she ran as fast as an older, overweight lady could run. Nina had long, grey, plaited hair. It was completely the wrong hairstyle for a woman her age. Lady Faith thought it was perfect. Nina’s skirt reached to her ankles and her sweater was almost as long and both were dirty from outside work.

“You look as wonderful as ever,” said Lady Faith.

That night, as Amira lay peacefully in her bed, listening to the many night noises, she thought of the children’s father, Zufar. Zufar and Amira had been lifelong mates eons ago. When Amira was twenty-two and living in Charlie’s shed in the back hills of Waldmeer, Milyaket had taken her to the Vastandamine Forest, in the Homelands, to meet with Zufar before he went to a distant dimension. Now that she was in the Borderfirma Mountains, she could recall three other important occasions when Amira or, more precisely, Lady Faith reconnected with Zufar.

Lady Faith had always wanted children. She was very conscious of her responsibilities in Borderfirma and in the other dimensions but she could not negate the feelings that were inside her. As a young adult, she had sent a request to the Homeland seeking an audience with the Advisors to speak about the matter. They responded with the following letter,

We are aware of your desires and we want you to be happy. We have chosen a suitable father worthy of royal children. However, we must warn you not to get attached to him. Over the years, he will come to you three times to father three children. He will not be able to return at other times. You must also be willing to share the raising of your children with other people as your responsibilities will not allow you to be a fulltime mother. However, the children will be in good hands with your own mother, Odin, Nina, and the other companions around you. If this is acceptable to you then expect your visitor soon.

Lovingly,
The Advisors,
The Homeland

Indeed, it was very acceptable to the young Lady Faith and her special visitor appeared as they said he would. That was about twenty years ago. Nine months later, Bethany was born.

Read/listen to more of Waldmeer/Circles of Separation

2 Replies to “Circles of Separation: Odin of the Great Valley”