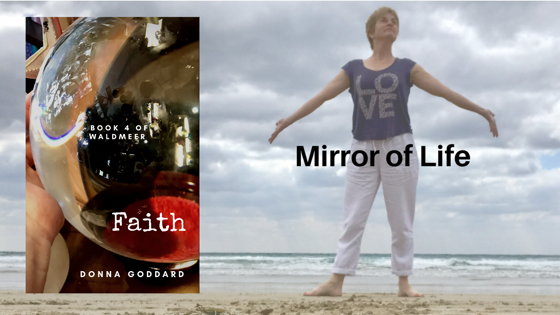 All of creation wants to create through you.

Chapter 12: Land in the Middle

Ten years ago in Borderfirma, when Bethany was told that she would begin her training to take over the running of the Borderfirma Mountains, she asked where her mother would be going.

Lady Faith replied, “The Inner Circle is not the end of the journey. There is another land. It lies between Borderfirma and Heaven. It is the place where all conflicting thoughts are settled and all illusions are dismantled. Once there, Heaven’s pull is very great.” Seeing her daughter’s concern, Lady Faith added, “Oh, don’t worry. I’m not staying there. They told me I’d be back and that I would also be returning to Earth.”

Indeed, Lady Faith returned to both. This is what happened, some years ago, in that mystical and marvellous place, the land in the middle of Borderfirma and Heaven, Tierramedio.

Lady Faith woke in a place that she had never been before. She found herself walking down a long, empty corridor. At the end of the corridor was a door with a sign saying, H. & C. Headquarters. Once through the door, she was pleased to see someone she knew sitting at the reception desk. It was Kathleen, Thomas’s partner of several years who had passed on.

“Kathleen!” said Faith. “How lovely to see you.” There seemed no need to explain whether she was Amira or Lady Faith.

“They told me you were coming,” said Kathleen. She looked about the same age as when she left Earth but she didn’t have any of the heaviness common to Earth people. She was light and serene.

“How is Thomas?” asked Kathleen.

“I haven’t been to Earth, myself, for quite a while,” said Faith. “However, last time I was there (and I don’t think much Earth time has passed since then) he had moved to Darnall and was working on fixing up the old Darnall Arcade. Kathleen looked at Faith enquiringly. She wanted more information about how he was really going. Faith thought for a moment and then said, “He struggled after you left but,” she added more cheerfully, “he can only go one way.”

Kathleen nodded and said, “There’s no avoiding it. Pain, that is. It is the way of Earth. No one goes there who does not suffer from similar problems.”

“What does H. and C. Headquarters stand for?” asked Faith.

Kathleen pointed to two doors on either side of her desk. One door had the word Heal above it. The other had the word Create above it. “You are at the Heal and Create Headquarters,” she said. “We are the portal to the land in the middle of Borderfirma and Heaven, Tierramedio.

“Do both doors lead to Tierramedio?” asked Faith.

Faith looked at the doors. Creating is higher than healing, she thought. It is primal. However, in order to create profoundly, we must first heal.

“Oh, that makes it easy,” said Faith. “The Heal door is Earth. I need to go back there.” She looked at the door and added quietly, “Because my friends are there and I have things to do.” Faith wondered if this was how the Masters were going to get her back to Earth.

“The other door is the entrance to Tierramedio,” said Kathleen. “Tierramedio is a centre of creation.”

“Actually, I’m not sure,” said Kathleen. “I’m not allowed to go through the Tierramedio door. That is why I am here at reception. I don’t want to return to Earth but I am not yet ready for Tierramedio. I am happy here and one day I will be able to walk through that door.”

There will be another way back to Earth, thought Faith. I need to keep growing. She walked to the Create door. “How do I open it?” asked Faith. As she said the words, the door, the reception desk, and Kathleen all vanished.

On the other side of the door was a large, plain mirror. Out of the corner of her eye, Faith saw many faces which were constantly changing. If she looked at them directly, they disappeared. She instinctively knew that the faces were her own from numerous lifetimes, both on Earth and elsewhere. Surprisingly, it wasn’t particularly interesting. It was like a catalogue of books she had already read and did not wish to read again.

Something pulled her away from the mirror, towards a spacious, blue room. It had nothing in it but it felt alive and inviting. There was a striking purity in the room as if it had never been contaminated by anything unlike itself. A man walked towards her. It was the Master from the Garden of Garourinn. Faith knew that this Master had only visited Earth once. Once was enough. What he left behind was healing Earth, even now, thousands of years later. He was a great Master. Faith bowed her head. The Master accepted her salutation. Masters do not need recognition. They have no ego to accept such things, but we need to give it.

“You looked into the Mirror of Life,” said the Master.

“Yes,” said Faith. “Is that what the mirror is called?”

The Master did not answer her question but said, “You have come for something.”

“Yes,” said Faith again. She knew that she had come for something but if he asked her what it was, she wouldn’t be able to articulate an answer.

Until this point, Faith felt quite wonderful in Tierramedio. Wonderful and expectant. Although she did not vanish as the Master suggested, the feeling of wonderfulness did. A disturbing, distracting noise started yelling in her ear. Something was fighting inside her. The Master had released it. It was let loose. Although she stood still, she could feel a storm of movement rising within. Every face she had seen in the Mirror of Life seemed to be screaming at her, Danger. As it did not subside, she had to move away from the Master to make it more bearable.

After a few minutes, Faith heard a tiny voice in the centre of the crazy ones, “What have you got to lose?” it said. “What are you hanging onto?” Was it the master speaking? Was it her own inner voice? Faith wasn’t sure. She thought of all the misery from many lifetimes. She saw the countless miseries of all those she loved, and all those she didn’t know, and all those who weren’t even born yet. Again, the voice spoke, “Trust. You have not come this far to turn back now. You are almost there. Have faith.”

There was a loud smash of glass breaking. It was the Mirror of Life. Then everything went black and it was utterly silent and still. Everything disappeared; the blue room, the Master, her body, her memories, her desires, her pain, her longings, her separation, and even herself. She dared not look to see what was left but there seemed no one left to do the looking. Slowly, the light came back, the blue room returned, and the Master was still standing there.

Faith looked at her body. Its attachment to her was very thin. Was there anyone in it, she wondered? She thought of moving her arm and it moved obediently. She checked if all her senses were working. She could see the master, yes. She could hear the faint sounds beyond the room, yes. She could smell the sweetness of Tierramedio. She touched her face and could feel its aliveness. There were other senses in her as well. They had entered her being and were waiting for an outlet. All of creation wanted to create through her. Through anyone. Through everyone.

The Master spoke one last time before leaving the room. “Go back to Borderfirma now,” he said. “Remember, you are not your body and you are not in your body. Your body is in Life. Use it until you need it no more and then you will be happy to release it.” The Master smiled at Faith with the sort of smile that encompasses everything magnificent and everything tiny and sees no difference between the two.