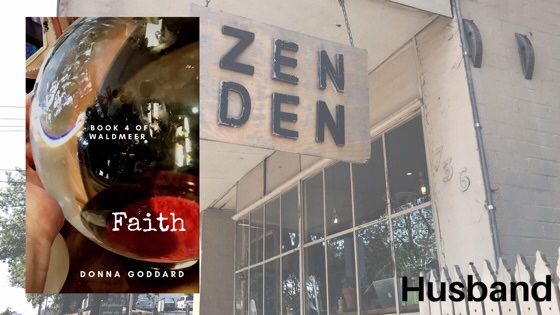 When the ocean comes to you as a lover, marry, at once, quickly, for God’s sake. Don’t postpone it. Existence has no better gift. Rumi

Desperation is the door of the Divine.

In Wurt Wurt Koort:
“I need a bigger space for my Mystery School,” said Aunt Charity as she showed Bethany the room she had set up in the back of Rybert’s tearooms.

Bethany passed her hand over the bewitching glass ball which had pride of place in the middle of the round table. How similar it looks to Nina’s, she thought. It even has the same red velvet underneath and the same mysterious lights darting around inside.

“It’s one of a pair,” said Aunt Charity. “The sister crystal ball went to a woman I met in a country shop sixty-five years ago. The shop was called Zen Den.”

Nina is Charity’s age, thought Bethany. “Where did the other woman come from?”

“I don’t know, said Charity. “She said it was somewhere quite difficult to get to so I assumed it was an inaccessible part of the country.”

“Did you ever see her again?” asked Bethany.

“No,” said Charity, “but over the years, she has written to me every now and again. There’s never a return address but she always seems to find out my address. She wrote to me not long after my daughter died. It wasn’t only the loss of a child; I lost everything at that time. As often happens after the death of a child, I lost my marriage. I could no longer tolerate living here in Wurt Wurt Koort so I lost my community. I did not know what anything meant anymore. I lost my confidence, my spiritual path, and ultimately myself. After getting the letter, I decided to visit the Zen Den again. Desperation. Desperation is the door of the Divine. I found a little book of love poems by the Persian mystic, Rumi. The last thing I wanted was a book about love as I felt that I had lost all the love in my life but the book would not get out of my hand and so it became my new companion.”

Changing topic, Charity said, “Rybert told me that your mother is back in the mountains running the family business.”

“Yes,” said Bethany with some shame. “The business is really my responsibility. I’ve been trained for it over ten years but, somehow, I feel I will never be up to it. Anyway, when I was in the mountains, a reader told me that I would find my husband if I came to live here. There is no sign of him anywhere,” she said looking around in all directions. Both women laughed.

Charity opened Bethany’s hand, put the worn book of love poems into it, and said, “A new friend.”

Chapter 22: Snake in the Glass

The little book of love poems seemed to have a power of its own. It insisted on remaining on the kitchen table where it was never out of sight. Not only did it want to be read, but it wanted to be read aloud.

In the morning, Bethany recited,

Inside this new love, die.
Do it now. Die,
and be quiet. Quietness is the surest
sign that you’ve died.
Your old life was a frantic running
from silence.

When the ocean comes to you as a lover,
marry, at once, quickly,
for God’s sake.
Don’t postpone it.
Existence has no better gift.

As she undressed for bed,

Love sits beside me like a private supply of itself.
Our nakedness
together changes me completely.

A week later, Bethany called into Charity’s makeshift room in the cafe. “You have your very own Zen Den here,” said Bethany, “but I have found a better place for your Mystery School.”

“I am returning home to the mountains,” said Bethany. “You can use the space I have created for my classes.”

“What about your husband?” asked Charity.

“I have him,” said Bethany putting her hand on her heart.

Bethany walked to the table and touched the ball. “What is this?” she asked as she pointed to a snake-like light on the outer ball. She had seen the same light in Nina’s ball.

“It’s a snake,” said Charity. “It lets us know the greatest point of danger for the person we are reading for.”

“What is it pointing to?” asked Bethany.

“To yourself,” said Aunt Charity.

“Pride infers ownership,” said Lady Faith. “You know I have no sense of ownership of my children.”

Something in Lady Faith’s voice sounded tense and so Chester talked carefully. “Aristotle will be having a fine time with Odin,” he said. Chester had accompanied Odin from the Great Valley to the palace but he had declined the month-long adventure into the other Borderfirma lands on the grounds of being “too old for such things”. “Malik will be glad to have you back in Waldmeer,” said Chester assuming that Lady Faith would return to Waldmeer as soon as possible.

“Malik is probably enjoying having the house to himself,” said Faith.

“And Rachael too,” said Chester with one slanty eye which was presumably a wink. Faith didn’t laugh. “Will you go to Darnall then?” asked Chester.

“No,” said Faith. The expression on her face told Chester that Gabriel was the problem. “I’m sorry. I’m being very short, aren’t I?” Chester didn’t answer. “Gabriel is involved with someone else,” said Faith bluntly.

“No,” said Faith, “he won’t talk in any workable way. If he thinks I am putting energy into other relationships, he acts like I have mortally wounded him but when it comes to what he does, he has little consideration of my feelings.” Faith picked up a perfect, red autumn leaf from the mounting collection in the palace garden. “It’s not jealousy. If something is right for those we love, wouldn’t we want them to take it?” She threw the leaf into the shifting wind. “But love is a gift, not a right.” She kicked her way through a pile of leaves. “Once the Master told me, ‘You can never lose someone you love but, very often, relationships get to the point where nothing else can be learned at that time.’”

As they walked back to the palace, Chester recited one of Bethany’s love poems,

When the ocean comes to you as a lover,
marry, at once, quickly,
for God’s sake.
Don’t postpone it.
Existence has no better gift.

“Clearly, they don’t understand,” said Faith, “but, Chester, do I? Do I understand?”