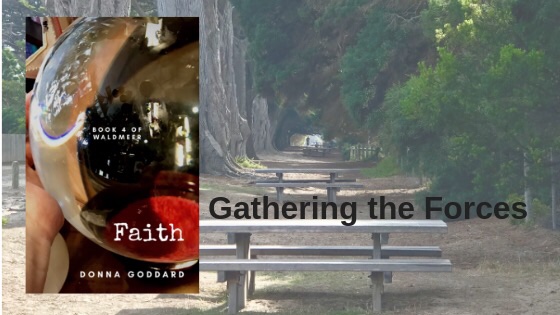 A year ago in the Borderfirma Mountains:
One year ago, in the Great Valley of the Borderfirma Mountains, Nina passed her hand over her flickering crystal ball. Faith watched carefully. The last time Faith had seen the crystal ball was when Nina did a reading for Bethany and told her that she would visit Earth and find her future husband. With the help of Rybert’s Aunt Charity, Bethany had discovered her internal husband on Earth. It was the realisation of her spiritual completeness. She returned to take over the running of the Borderfirma Mountains with her newfound husband in tow. Mind you, since then, Bethany had not been lacking in attention from eligible men. It was a matter of time and destiny to see who of the wonderful, young men was meant for her. Faith sometimes smiled to herself that it might not be one of “the wonderful, young men” at all. It could be anyone, of any age, with any personality, she thought. She would leave that matter to Bethany, just as she had always listened to her own heart about such things. 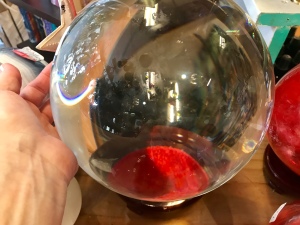 Faith’s eyes rested on the row of religious statues which were overseeing Nina’s reading. Krishna with his flute and Ganesh with his elephant trunk were at the head of the pack. Nina’s expression became serious. She looked increasingly worried as she gazed at the lights in the ball reflecting off the red velvet beneath. Not looking up, she said in semi-trance,

The forces are gathering
as we sit in this room.
The darkness amasses
bringing its doom.

The sides are chosen,
the wheels in motion.
Go to the Monastery,
set your devotion.

The last useless battle;
someone will fall.
Useless but useful,
for nothing, for All.

“What does it mean?” asked Faith.

After discussion, Faith, Nina, and Odin decided the message meant that Evanora was preparing a Lowland’s army to attack the other Borderfirma territories. As the Borderfirma Mountains ran along the Lowland’s border, it was in imminent danger. Odin had had suspicions of a gathering force for some time now.

“What is the Monastery that the crystal ball refers to?” asked Faith.

“It is the ancient monastery at the end of Indra and her father’s property,” said Nina. “It’s next to the sacred Floating Cave. In the absence of any monks, Indra’s father is the current caretaker of the Monastery.”

Although Indra’s father, Peter, was known as the best snake catcher in the Lowlands, he was more than a simple snake catcher. He was all the things he seemed to be – honest, hardworking, practical, and generous – but he also came from the hidden line of Lowland mystics. They had been underground since the beginning of Evanora’s rule and conscientiously worked towards the ending of her destructive and despotic reign.

Since Nina’s reading, Faith had been living in the Floating Cave Monastery by herself. That is why she hadn’t returned to Waldmeer for the past year. She often visited Nina and Odin in the Great Valley as Aristotle was living with them. Sometimes, Aristotle came to the Lowlands to be with his mother. He stayed in Indra and Peter’s cottage as Faith felt that the vibration of the Monastery was too intense for Aristotle’s delicate, developing spiritual constitution. Aristotle and Indra were now thirteen years old; no longer children but a long way off adulthood.

As the Monastery had been abandoned decades ago, Faith had spent most of her time fixing it up. When she first arrived there, it was early winter. It was a very cold building. Her most urgent mission was to get some heating working. Most days, Peter ambled across to the Monastery to help Faith with all the practical things that he was so good at; including getting rid of any snakes in the building. After fixing up the heating and her own bedroom, Faith methodically cleaned and prepared the old monk rooms. She was told that they should be made ready for the gathering forces. Each room had two single beds as the monks shared a room with a fellow monk. She was also told that when the forces started to arrive, the rooms were to be filled in order of those who appeared.

The Monastery was now clean, warm, and comfortable. It was basic but, after all, it was a monastery. It didn’t take long for the centuries of spiritual practices and prayer which had been the lifeblood of the place to refill the corridors and crevices of the building. It seemed to Faith that it was reforming a protective and healing energy field in and around the building.

This evening, Faith turned off the lights in Floating Cave Monastery, except for the upstairs hallway and her small bedroom. It was only nine o’clock but she was used to going to bed early and waking before first light. As she was about to retire, the ancient bell rang.

“What?” she said out loud. “Someone is coming now?” Who will be my first warrior? she wondered as she descended the stairs and headed for the peeling, green entrance door at the opposite end of the hallway.

“Rybert?” she said in surprise. “What are you doing here?” How does Rybert know about the Borderfirma Battle? she thought. Anyway, he wasn’t exactly the warrior she was expecting.

“That’s not very nice,” said Rybert, “after all my effort to get here. You could say, ‘Thank you for coming.’”

“Yes, of course, thank you,” said Faith. “But how did you get here and why are…?” She stopped talking and reminded herself that she was not in control of who was coming and why. Besides, she was pleased to see him. “Wait till I get my dressing gown and we’ll have some tea. The kitchen is second on the left.” Faith turned on the lights again and hurried upstairs to get something warm to wear.

Over tea and toast, Rybert explained that his Aunt Charity told him that she had seen the gathering of two armies in her crystal ball but she didn’t recognise the landscape or most of the faces.

“She reluctantly told me that the ball said I must travel to the battle,” said Rybert. “I told her that I am no soldier but she said that the ball doesn’t make mistakes. She didn’t want to tell me about it because…well, she’s my aunty. I suppose she loves me.” After a pause, Rybert added rather sweetly, “Is it okay that I have come?”

“It’s not my decision who comes, Rybert,” said Faith. “Who comes, comes.”

That wasn’t the answer Rybert wanted. Faith looked at him more closely. Always, he had been the friend of all, the comedian, the life of the party. Now, he was being something else. She reconsidered her response. He had taken a great risk, on many levels, to be here. He deserved a better answer than what she had given him.

“Thank you for coming,” said Faith with her hand on her heart.

She showed him his room, turned off the lights for the second time, and headed to her bedroom upstairs. Climbing into bed, she thought with half-amusement and half-concern, If Rybert is my first warrior, it’s going to be a very weird battle. 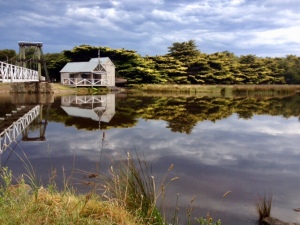 A week ago in Waldmeer:
Early one morning, last week, Gabriel walked across the swing bridge to get to the Waldmeer Boathouse Cafe on the beach. As he sat drinking his coffee and staring at the waves, a man sat at the table next to him. Gabriel thought that he need not have sat so close as there were plenty of tables and they were the only customers. Nevertheless, he couldn’t help feeling drawn to the stranger. There was something trustworthy about him.

The stranger said casually, “I believe you are Faith’s friend?”

Grabbing his coffee, Gabriel headed for Cypress Lane. He hadn’t seen Faith for a year. It was a long time. As he strode through the tunnel of trees, his thoughts became still and peaceful. He felt that his body was disappearing. It wasn’t an unpleasant feeling, so he didn’t stop it. Next thing he knew, he was in the Borderfirma Lowlands at Floating Cave Monastery with Faith standing nearby. And that is how he came to have his adventure in the salt pool with Faith. By the end of that day, Gabriel found himself back amongst the grand trees of Cypress Lane.

Gabriel’s visit to Floating Cave seemed to have an after-effect on his state of mind. He couldn’t settle to anything over the coming days. He was sluggish and disconnected. He went to coffee shops but decided that he didn’t feel like coffee. He picked up his phone, numerous times, to check his social media but decided that he had no interest in seeing what everyone was doing and saying. He had to really concentrate to get through his teaching classes. Gradually, he returned to his normal state of mind. Nevertheless, Floating Cave was never far from his thoughts and on a clear, starry evening at the end of the week, he returned to Cypress Lane and cautiously proceeded through the tunnel of dark trees.

In the Borderfirma Lowlands:
The evening after Rybert arrived at Floating Cave Monastery, the ancient monastery bell rang again as Faith was preparing for bed. I don’t know why it can’t bring my warriors first thing in the morning, thought Faith, rather than last thing at night when I am tired. As she opened the old, green monastery door, there stood Gabriel. Faith was becoming increasingly concerned about who she was being sent. Not only were they dreadful warriors but, more concerning, the time was fast approaching when the Borderfirma Lowlands would be a dangerous place to be. She had already told Aristotle to return to the Great Valley and not to come back to the Lowlands until after the battle. I’m going to send Gabriel and Rybert back too, she thought on seeing her new recruit.

“Come in, Gabriel,” said Faith rather distractedly. “You have to share a room with Rybert,” she continued as she started walking down the hall. Gabriel went to object but Faith put up her hand and said, “I don’t decide. In order of arrival, the rooms are to be filled.”

Gabriel and Rybert looked at each other in the small monk’s room. Turning his back on Rybert, Gabriel said quietly to Faith, “I’m not sharing a room. Unless it’s with you. Can’t I sleep in your room?”

“It’s a monastery, Gabriel,” said Faith. “No sex in monasteries.”

“Calm the farm,” said Rybert who decided to join the conversation. “You have me, pumpkin,” he said to Gabriel with a wink. Gabriel groaned and sat with a thump on the bed. “Ah, that’s my bed,” said Rybert, “unless you want to share.”

Gabriel pushed past Rybert and went to the other bed but he couldn’t help smiling a little. Rybert was a funny guy. “Just don’t touch me,” said Gabriel.

“Don’t worry,” said Rybert being his more assertive self, “I have no intention of touching you, Princess.”

Faith looked at them, shook her head, and walked to her own bedroom. Ridiculous, she thought as she ascended the stairs. They are both ridiculous. Ridiculous together. And the world’s most ridiculous warriors. Tomorrow they both have to go home.