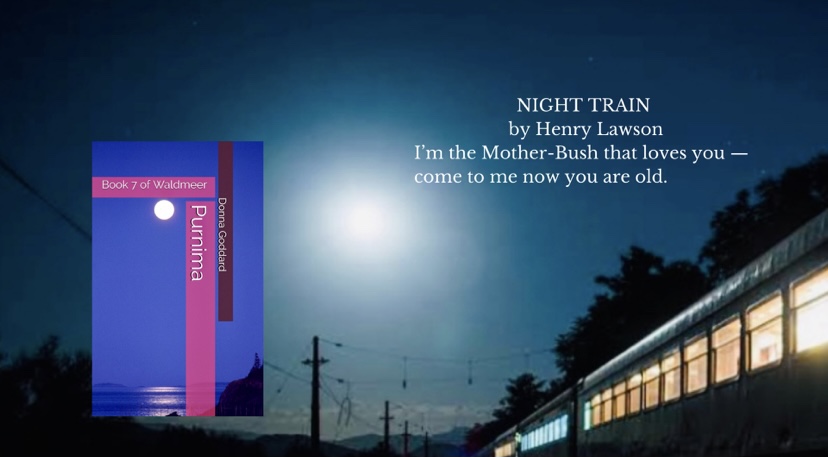 Here is the next part of Purnima (Book 7 of Waldmeer): Gum Flat.

Have you seen the bush by moonlight, from the train, go running by?
Blackened log and stump and sapling, ghostly trees all dead and dry;
Here a patch of glassy water; there a glimpse of mystic sky?
Have you heard the still voice calling — yet so warm, and yet so cold:
“I’m the Mother-Bush that bore you! Come to me when you are old”?

Did you see the Bush below you sweeping darkly to the Range,
All unchanged and all unchanging, yet so very old and strange!
While you thought in softened anger of the things that did estrange?
(Did you hear the Bush a‑calling, when your heart was young and bold:
“I’m the Mother-Bush that nursed you; come to me when you are old”?)

In the cutting or the tunnel, out of sight of stock or shed,
Did you hear the grey Bush calling from the pine-ridge overhead:
“You have seen the seas and cities — all is cold to you, or dead —
All seems done and all seems told, but the grey-light turns to gold!
I’m the Mother-Bush that loves you — come to me now you are old”?

(On The Night Train by Henry Lawson)

On the way to Gum Flat:

Merlyn read the Henry Lawson poem which was on the wall of the night train to Gum Flat. Written in 1922, the year of Lawson’s passing, it was his last poem. She looked out the dark window at the even darker bush running by and felt a profound sense of belonging and also a profound sense of separation – Have you heard the still voice calling — yet so warm, and yet so cold. It was the same land that Lawson saw, wrote about, and loved. This land doesn’t really change. It is too vast, ancient, detached, motherly. All unchanged and all unchanging, yet so very old and strange.

Indeed, the full moon glow gave the many dead gum trees a ghostly appearance. It was an unforgiving environment even for the hardiest and most tolerant of gums. They did have tactics before succumbing to death. In the long dry periods, they cut off supply to nominated roots and associated branches to save themselves. Eventually, the dried-out branches would crack and crash to the ground, occasionally on top of unsuspecting farmers, thus giving the gums the nickname of Widow Maker.

The running bush under the mystic sky was the land of Merlyn’s childhood. She left it a long time ago. Maybe, an eternity ago. She thought she had forgotten it and was sure it had forgotten her. Apparently, neither was true.

After trying to book the daytime express passenger train (which was full due to short notice), Merlyn decided on the night train. She had used it many times, as a teenager and young adult, on trips back and forth to the city. It was essentially a freight train with a rickety, old passenger carriage attached at the end. Her grandmother’s house was on a hill, just outside of Gum Flat, overlooking the railway track. The train was like a clock. Twice a day, her and her grandmother (and whichever other children happened to be in the house) would wave from the verandah at the occupants of the passing train. One train was this one. It arrived in Gum Flat at dawn when the grey-light turns to gold. The other train was the daytime express passenger train which sped past at 2.00 in the afternoon. It never seemed to occur to anyone that the strangers in the train may not look or, even if they did look, may not be interested in the folk waving to them from the farmhouse on the hill. Once, as a child, Merlyn asked her grandmother about it.

“We don’t really know them,” said Merlyn seriously. She was a serious child.

“Then we wave, anyway,” said her grandmother cheerily.

People in the country wave because it’s important to them that they wave. The response doesn’t alter what they feel they should do. Apart from that, they don’t overthink things. They have too much to do. Merlyn did. Think, that is. That’s why she left. That’s also she was returning to Gum Flat now.

There was a more practical reason for returning. She and her siblings had been left with the railway station master’s house after the recent death of her uncle who had resided there. He had not lived in it for years, and for years before that it had become more and more run down as happens with old people’s houses. Merlyn had not seen her uncle in probably twenty years but, having no children of his own, he decided to leave the house to her and her siblings.

The decline of the western railway which, at one time, was supreme ruler of transportation – for people, freight, and mail – seemed to not only break the spirit of the old trains but also her uncle’s. That is why she hadn’t seen him in so long. He didn’t want to see anyone and lived quietly in the nursing home of the closest town. Gum Flat didn’t have a nursing home. These days, it had a railway station, a pub, two little churches of opposing denominations, an empty police station, and several long-abandoned shops. That was it.

As the night train’s hypnotic trance was dissipated by the emerging, gold dawn and the approaching Gum Flat station, Merlyn’s thoughts were drawn back to the reality of small-town country life. Their world is small; occasionally idyllic, but nearly always small. She looked up at the Lawson poem – While you thought in softened anger of the things that did estrange.

Part of growing up involves becoming estranged from one’s birth family, thought Merlyn philosophically. If the family romance is not broken, one never truly grows up.

Usually, we don’t have to look too far to find estrangement material, but country estrangement often takes a particular form. Merlyn’s father died when she was young and another uncle, Uncle Ochre, a farmer, graciously took it upon himself to be the proxy father. Although the intention was commendable, it was not an easy match. One particularly strong memory was of him asking Merlyn about her chosen career path. Like Merlyn’s father, he was anxious for her to use her brain and get a good education in some mainstream, responsible area. Merlyn, however, was already strongly inclined to other matters in life and tried to explain that she wanted to do something more spiritual.

Uncle Ochre threw his arms in the air and, storming out of the room in exasperation, said, “Religion? Religion! What sort of a job is that? Teaching Hail Marys!”

When Merlyn decided to follow her humanitarian calling as a young adult and spent much of my time working voluntarily with the homeless of the inner-city, he, not surprisingly, said, “Someone else can look after them. You are wasting your life and your brain. Besides, charity begins at home. If you want to help someone, help your family.”

That was meant to mean that Merlyn did not have common sense, and that her father did, and that it was Uncle Ochre’s responsibility to make sure Merlyn got some common sense into her head.

It was true that common sense wasn’t Merlyn’s forte. It wasn’t that she was silly or stupid, but she heard so many more voices than the common-sense voice. That complicates matters. And sometimes the other voices were much more interesting and pressing than the common common-sense voice. Besides, for all the talk about country common sense, Merlyn thought that common sense was not always sensical and there were often more intelligent (albeit, less obvious) solutions. Further, it seemed to her that what was good common sense in one environment was far from common or sensical in another environment. It was situational. City slickers can be a danger to themselves and others in the outback, but the reverse is also true.

With the significant mismatch of worldview, the one thing that saved the situation (long-term, if not at the time) was that Uncle Ochre viewed Merlyn as a daughter. He would have had the same response to his own daughter. Somehow, that made it bearable. Not stay-able but bearable.

As the night train whistled into the growing light of early morning and into Gum Flat station, Merlyn took one final look at the poem on the rattling train wall, I’m the Mother-Bush that loves you — come to me now you are old.

I’m not old, she thought, but, somehow, the bush makes everything old; maybe, timeless.