Here is the next chapter of Esther (Book 2 of Waldmeer – 2nd Generation).

Summer was in the thick of things; smack-bang in the middle of Waldmeer. The tourists had taken over the little town, as they always did at this time of year. The locals oscillated between threatening to run them over and reminding themselves that without the summer trade, the businesses would not survive. They cursed the noise, rubbish, traffic jams, and “obnoxious, selfish, self-entitled” city-dwellers. The long-term business owners pleaded with their fellow-locals to be patient and polite. They coaxed them along with, A smile costs nothing. They reminded them that the majority of the visitors would only be around for six weeks and then they would have their beloved town back to themselves. Mostly.

END_OF_DOCUMENT_TOKEN_TO_BE_REPLACED

Here is the next part of Esther (Book 2 of Waldmeer – 2nd Generation). The audio and 3 chapters of this section (Ajna and Manipura) are included –
Chapter 12: Cracking Nuts
Chapter 13: Ajna Temple
Chapter 14: Manipura Dancers

END_OF_DOCUMENT_TOKEN_TO_BE_REPLACED

Here is the next part of Pittown (Book 5 of the Waldmeer Series).

When Gabriel travelled from Waldmeer to the Borderfirma Lowlands, twenty years ago, he was ready to give his relationship with Faith-Amira his best. For the first few years, he was somewhat dependent because he didn’t know how to live in the interdimensional world on his own. Gradually, he became accustomed to it. He made friends and found opportunities to follow his own leanings; including the ones that weren’t particularly aligned with Faith’s. After all, he was a different person to her. He always had been. He always would be. END_OF_DOCUMENT_TOKEN_TO_BE_REPLACED

Recently, we discovered that Pittown is Book 5 of the Waldmeer Series. Merlyn, Ben, and Tom of Pittown have connected with the towns of Waldmeer and Wurt Wurt Koort. After twenty years, we are reintroduced to Rybert (now 60) of Wurt Wurt Koort Tearooms and Faith-Amira’s son, Malik (now mid-40’s), of the Waldmeer Warriors. We do not know what happened to Faith-Amira (now 70) and Gabriel (now 60) in the inter-dimensional Borderfirma Mountains. In order to remind us of the events of Waldmeer and Borderfirma, here is a recap of Faith (Book 4 of Waldmeer). END_OF_DOCUMENT_TOKEN_TO_BE_REPLACED 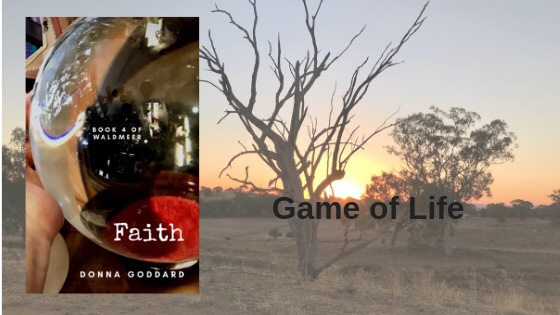 Faith and Rybert walked to the top of a nearby hill at sunrise. This part of the Lowlands was mostly grassland. The wind was cold and unfriendly and there were few trees to minimise its sweep across the hillside. Rybert and Faith both pulled their coats tighter. The sun would warm the land a little later but its warmth was only a promise at the moment.

“I don’t want to go back to Wurt Wurt Koort,” said Rybert. “I wouldn’t have come if I wasn’t intending to stay.”

She looked out over the land. Soon the entire hillside and beyond would be filled with the armies from the Borderfirma territories. END_OF_DOCUMENT_TOKEN_TO_BE_REPLACED

This is the last part of Circles of Separation (Book 3 of Waldmeer).

“What do you think, Ide?” asked Salt. He was standing in his new massage and healing room at Vibes Yoga Studio in Waldmeer.

Salt didn’t need her kisses but he was happy to have them. Not long ago, he had asked Ide about the idea of him staying in her house for most of the week. Previously, he had been staying there a few days and spending the rest of the week in the back hills with the Clinker clan. Ide knew that if she said yes, she was saying yes to a couple relationship. She recalled when Farkas asked her if she wanted to jointly buy this house with him. At the time, she had considered all the things that could go wrong. There were a lot. As it turned out, some of them did happen. However, she now pondered, many of her fears didn’t eventuate and many wonderful moments came from her and Farkas’s time together. One of those moments turned into their child, Lan-Lan. Her greatest fear had been that the relationship would fall apart. It did, thought Ide, and, you know what, we are fine. END_OF_DOCUMENT_TOKEN_TO_BE_REPLACED 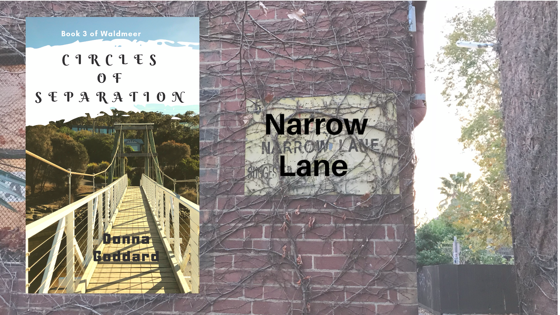 Put your efforts towards the things in life that enhance your highest self.

“We have taken matters into our own hands,” said Mullum-Mullum to Amira. “We had concerns about Gabriel’s safety in regards Evanora. There is no need for you to be worried, however, we ask that you not see him unless instructed to do so.” Mullum-Mullum gazed into the distance. Amira couldn’t see where he was looking. Nor could she see anything around him. Normally, if Amira saw Mullum-Mullum in her night-travels, she saw him in the setting of the Darnall rose garden. However, for some reason, tonight, he seemed to be standing in a blank space with no distinguishing features.

There was something unusual about Rose. She didn’t do or say anything unusual but whenever she was around, everything worked well.

Farkas pulled his hood on and made a run for Ide’s front porch in the storm. He was picking up baby Lan-Lan. Ide had been able to keep the house that she and Farkas had jointly owned, at least, for now. The main elder of the Clinkers had decided to rent Ide’s large, front room. He was using it for meetings and private sessions and, occasionally, sleeping there. His tribe name was Salt, although, Ide’s teenage son, Christopher, had always referred to him as Magic Man. That is the name that stuck in Farkas’s mind. Although Salt was an elder, he was far from elderly. At seventy, he could run through the forest almost as fast as the young Clinker men and he could, certainly, outwit them. END_OF_DOCUMENT_TOKEN_TO_BE_REPLACED 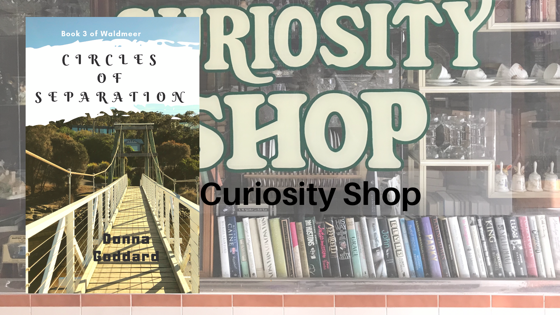 Chapter 34: Not Dead Yet

Two months had passed. It was still winter but no one in Gabriel and Amira’s Dementia Unit dance class was cold. Everyone was hot and pumping jive. The class had come to an equilibrium of its own accord. Gabriel was given notes from the “proper” dance instructors, although, somewhat begrudgingly. The notes were enough to give a loose direction and Wolfgang and Madeline would demonstrate the technical elements of each dance for anyone interested. Although Madeline’s mind could not remember the technique, her body remembered perfectly well the movements she had practised for so many years. Lacking in technical knowledge, Gabriel and Amira decided to go with transferring the feeling of each dance and giving their students an immersive experience. Basically, all that meant was turning the music up and dancing enthusiastically with the class members in, more or less, the appropriate style. END_OF_DOCUMENT_TOKEN_TO_BE_REPLACED

The worst person to escape is oneself.

Even though Thomas and Kathleen had previously been boyfriend and girlfriend for two years and friends for decades, they had never been on a holiday together. When Kathleen had a holiday house in Waldmeer, being in her house was her holiday. Nor had they ever lived in the same house. Their holiday was quite a revelation. It had wonderful moments and difficult ones. END_OF_DOCUMENT_TOKEN_TO_BE_REPLACED