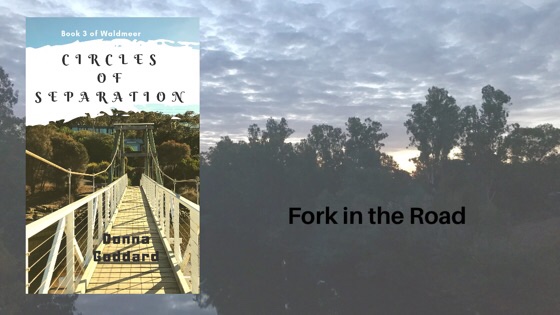 Amira and some of her friends from Waldmeer continue their search for healing and happiness in Circles of Separation.

Vera stood very still. She listened carefully to Mullum-Mullum. She did not want to miss any of the few words he was giving by way of instruction. In his customary style, Mullum-Mullum spoke in a meaningful but mysterious manner,

Think not you can return on the path that leads to the fork.
Taken once, it disappears as the choice lies ahead.
Both roads will lead to somewhere but one will be to nowhere.

It was Mullum-Mullum who first told Vera about the Inner Circle. She was not sure who told her to go there but, apparently, it was already decided. She surmised that Mullum-Mullum’s verse meant that she would come to a fork in the road and, having reached that point, there would be no turning back. She glanced up, realised Mullum-Mullum was walking into the forest, and quickly asked if he had more advice. He stared at her with dramatic, grey eyes. They were deep enough to carry part of the world’s creation in them; powerful eyes. One would be foolish to underestimate their owner. Yet, they were also peaceful and kind. They looked like water as if they were connecting with all the water, all the rivers, creeks and lakes in this vast land.

“Remember, Vera,” said Mullum-Mullum, “by far, the most common reaction of those who get to the first circle, the Outer Circle, is to abandon the quest immediately. Be not deterred and you will have won the initial, important battle.”

Vera felt that Mullum-Mullum’s words were simultaneously frightening and reassuring. She startled as Aquilla, Mullum-Mullum’s wedge-tailed eagle, gave a high pitched squawk indicating he was about to move. That meant that Mullum-Mullum was about to move. Aquilla’s mission in life was to tail his master. He fulfilled his mission with devout single-mindedness. Aquilla was not the only bird around Mullum-Mullum. There were many birds that followed him and they appeared to have different tasks. Some came and went, relaying information from far and near. Some were busy with domestic duties, although, Vera was not quite sure what those duties were. Others were happy, little creatures whose sole purpose was spreading joy.

Mullum-Mullum was gone and so Vera turned to pick up her bag. She pulled her coat tightly around her and headed down the road towards the distant fork. Although somewhat daunted by her task, she knew she was not alone. For one thing, a family of the cheery, chirping birds had decided to keep her company. Mullum-Mullum’s doing, no doubt. They flitted about and sang their little songs proclaiming the world to be a wonderful, safe place. They will be good company, thought Vera. She reminded herself that Mullum-Mullum had one day, long since passed, made this same journey. He would not have sent her on it if it was too dangerous or if he felt she could not succeed. That lightened her load. The birds chattered more loudly and seemed to be agreeing with her summation.

Amira woke with a start and sat up to try and reorient herself. She noticed the thin line of early morning sun pushing its way through the gap in the curtains. She guessed that it was about six a.m. The fairy-wrens were darting across the window sill. The brilliant, blue forehead of the male was just visible. The larger and noisier cockatoos were starting to call out but were not yet enthusiastic in their conversations. These days, Amira often woke from her night wanderings with a clear memory of them. Whether it was a relief or not to wake up, depended on where she had been. Regardless, she did have another reason to be glad of waking up in her own bed.

She quietly lay back down and moved closer to the heavily sleeping body next to hers. She breathed in Gabriel’s smell. It was the sort of smell that comes from a contented, male body. She loved it. Anyone would love it, thought Amira. But not anyone is here. I am here. So I will love it for everyone. She smiled at her own sense of humour, aware that it might not be humorous to other people. She had never told Gabriel how much she liked that smell. One day she would. If he stayed long enough.

Amira slowly slid out of bed and reached for her clothes hanging over the bedpost. Gabriel rolled over and made a complaining noise. He was still asleep but he could complain even in his sleep. It would be a few hours before he was ready to wake up. By that time, Amira would have done many household tasks and relished the quiet, special morning hours alone.

She passed Gabriel his breakfast and sat down with her morning tea. Gabriel worked in the afternoons and evenings and so his hours and eating/sleeping patterns were later than hers.

“Did you have any dreams last night?” asked Amira.

“No. Why? I never dream. Or else I don’t remember any,” said Gabriel.

Amira saw many people in her night travels that she recognised. They often did not have the same body type, gender or personality as in this domain but they had the same energy field. That is how she recognised them. Almost always, the individuals were unaware of any other life but the one they knew here. For all the people she had seen, for some reason, she had not even once seen Gabriel. She didn’t know why.

“You dream up enough stuff for both of us,” said Gabriel affectionately as he took his plate to the sink.

A few hours later, Gabriel put his cardigan and scarf on and said, “Well, one of us needs to make money and seeing as no one else is offering, I have to go to work now.”

“Oh, you love your job,” replied Amira with a wave of her hand.

Six months ago, Gabriel had been offered a job teaching college art in a town about forty-five minutes away. It was a larger town than Waldmeer and a number of Waldmeer residents travelled to it every day for work. Country people get used to driving long distances.

“At least, the scenery is nice,” said Gabriel, “and I’m not looking at the next car’s backside like all the city people.”

The job had precipitated Gabriel’s decision to remain in Waldmeer rather than return to Eraldus. He still worked on his own art but three days teaching at the College gave a steady and reliable income; a bonus to any artist. Gabriel was initially reluctant to take the job, feeling that he might be, somehow, betraying himself but he was a realistic person and decided he could take it without betraying anything. It was working well. He enjoyed his students. They adored him and he valued that appreciation. After a few months at the College, he even told Amira that his art had improved as a result of teaching. Generally, Gabriel was loving lots of things at the moment. He was happy. That made Amira happy.

Amira started to recall where she had been last night, “No. I dreamed…” She paused and said, “I dreamed of somewhere else.”

Gabriel looked at her intently and stepped back slightly, “Well, you are awake now and here. Just remember that or one day you will dream yourself to another place altogether.” He opened the front door and readjusted his scarf creatively. Amira pondered that her scarf usually looked plain in comparison. “You don’t need to dream about anything, Amira,” continued Gabriel. “We have a happy dream right here.”